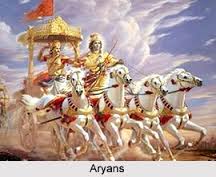 The Aryan civilization is a nomadic Indo-European culture.  The Aryans are people of European origin, though the exact place is unknown, who invaded India and controlled most of the Central and Northern parts of the country.  They lived in straw and wood huts in small villages called ganas.  The ganas were ruled by Rajahs.  The Aryans utilized a caste system, and they had a flourishing religion that became the basis for Hinduism.  The Aryans were an impactful civilization that revolutionized India, and gave us a religion still used today.