Mushroom used for soma.
The Aryan civilization began around 1500 BC, when they invaded India and took it from the declining Harappan Society.  The Aryans were thought to have came from Europe, however it is not known for sure.  The Aryans eventually came to a stop around 500 BC.

The Aryan people had a polytheistic religion.  The people of the Brahmin caste were priests.  They did many religious ceremonies, such as the yagna ceremony, and rituals, sometimes including the hallucinogenic drink "soma".  Some of the chief gods are Agni, the god of fire and the collector of sacrifices, Vishnu, the god of protection and sustenance, and Indra, the god of weather and war, as well as the king of the gods.

Their society was structured around a caste system.  They had the Brahmins (priests) who were at the top of society, followed by the Kshatriyas (warriors), the Viashyas (peasants and traders), and the Shudras (laborers) at the bottom.  However there was also another category called the "Untouchables" at the very bottom who dealt with anything relating to feces, blood, or killing.


The Aryans also had very sophisticated literature and language.  They not only created the Sanskrit language, but also created two great Hindu epics, the Ramayana and the Mahabharata.  Most of what we know of the Aryans today, we know from their holy books called the Vedas.  The Vedas contain the two Hindu epics.

The Aryans lived in villages called a gana.  Each gana was ruled by a regional rajah.  In return for protection, the rajah was given gifts of food and other valuables.  Aryans built their houses of either wood or straw, and were typically one-roomed and contained one family.  The Aryans invaded through the Khyber Pass, and still utilize it as a trade route.  On a day to day basis, Aryans utilize chariots, and iron technology.  The Aryans brought the Iron Age to India. 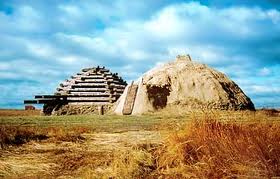 These are typical Aryan houses.